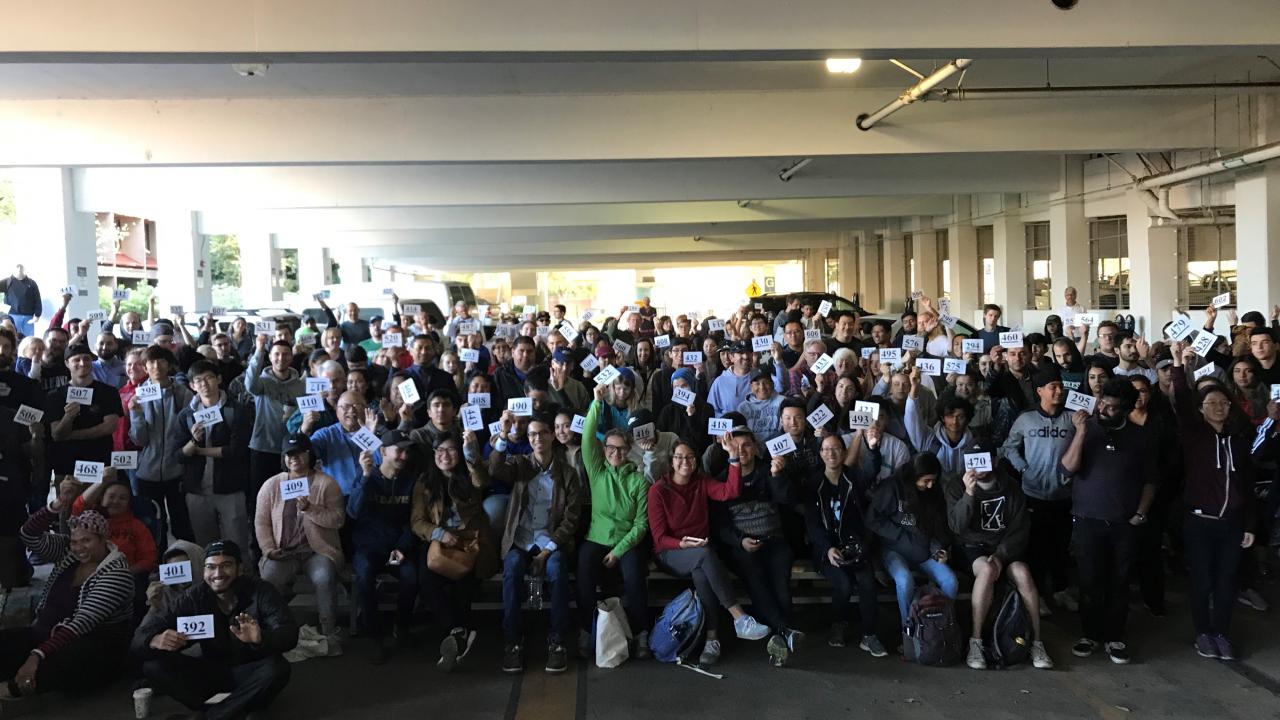 The fall Bicycle Auction at UC Davis has come and gone, drawing a huge crowd of roughly 400 people hoping to own one (or more) of hundreds of donated and abandoned bicycles collected from around campus. Aaron Curtin, Coordinator of the Bicycle Program, part of Transportation Services, notes that many of the lots up for sale were of better quality, ranging from bicycles that auction winners could ride home, to bicycles that needed a little work on the gears and tires—all selling for an average of $65.

“Before the auction, I pulled out about 300 bikes that needed more extensive repairs and donated those to local charities and on-campus programs who could make use of them,” Curtin shared. “We want everyone to have access to a bike that works, and it doesn’t have to be expensive.”

If you’re curious about the Bicycle Auction, here are some things you should know:

Where do you get the bicycles up for auction?
The Bicycle Program regularly patrols campus and tags (with a bright orange notice) any bicycle that appears to be abandoned. Once tagged, owners are given 48 hours to take their bicycle and if needed, repair it. Upon follow-up inspection two days later, bicycles whose warning tags are not removed are impounded for 90 days, allowing the owners to claim their missing bike. If your bicycle is registered, there is no cost to retrieve it from impound. If your bicycle is not registered, you may be asked to pay a $25 impound fee or register it for $12.

What are the main reasons bicycles are abandoned?
Bicycles that are not working well are the most likely to be abandoned by owners. Squeaky chains, loose brakes, flat tires, and lost keys for locks are all common reasons an owner might choose to walk away from their bicycle.

Do you try to get in touch with the owners of the bicycles?
Absolutely! The Bicycle Program follows up with owners of registered bicycles within 24 hours and transfer all the serial numbers to UCDPD for vetting, holding the bicycles for 90 days. Registration is proof of ownership and non-registered bicycles are difficult to reunite with owners as they require proof of purchase or recent photos with the unlocked bicycle to sufficiently prove ownership. All bicycles released are required to be registered prior to their release.

Where does the money from the bicycle auction go?
All money from the auction goes back to the Bicycle Program and helps create jobs for students. Our student workers are often the ones helping to clear the racks of abandoned bicycles so the campus community can have space to park their bicycles.

Can I see the bicycles before I bid?
Definitely. You may view the auction inventory on the morning of the auction starting at 7:30am. Viewing ends at 9:00am, just before bidding begins.

Can I just buy an abandoned bicycle from TAPS outside of the auction?
Unfortunately, no. It is against our policy for us to sell bicycles outright. This is to eliminate the potential for preferential treatment and give everyone a fair and equal opportunity to get a bike.

If you didn’t make it out to our fall Bicycle Auction, we’ll be back on May 12th for another opportunity to own a new-to-you bike. In the meantime, check out goclub.ucdavis.edu for upcoming events and tips on bicycle safety.

How can you help prevent bike theft on campus?

Peace, Love and Bicycles: Biking tips for the rainy season